"Painting is the language I speak, the only one I think, I speak well, the only way in which I can express myself about the life I feel consciously, subconsciously." — Soshana

Being a model of great modernists may be her claim to fame, but Soshana is and always has been a serious artist. Since the 1940s, Soshana has continued to paint and exhibit diligently. In recent years, an enormous body of her work has been exhibited in acclaimed international retrospectives. Seventeen paintings, by this 81-year-old Viennese artist, are currently showing at the Artistic Passages exhibit at ARC Gallery in Chicago. Several paintings are from the post WWII period, and the majority include her more recent work.

A contemporary of Picasso, Alberto Giacometti, Mark Rothko and Rufino Tamayo, Shoshana is a remarkable woman whose life’s journey is a story of courage, determination, curiosity and self-assertion. Giacometti and Picasso produced portraits of her and tried to capture the mysterious essence of a dark beauty with deep-set eyes, looking directly at the viewer as if questioning the very essence of life. 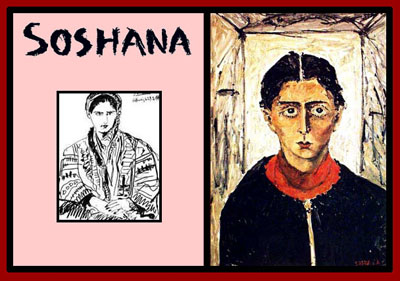 The painter and cosmopolitan…Soshana has traveled around the world and back, not in 80 days, but after all in almost 80 years. She has spent more than half of her life at the crucial intersections of the modern art scene and in far away countries. The Jewish painter, who had been displaced from Vienna, has dedicated her life obsessively to painting. In the 1950s she was acquainted with Giacometti, Picasso, Brancusi and Sartre and later on she had intensive contacts to the COBRA-group. She has portrayed famous politicians and artists and she has constantly broadened her artistic horizon by her extensive study trips. Her work has been shown to a broad audience, from Tokyo to Paris, from New York to Sao Paolo. Her paintings are now in important public and private collections. — Ulli Sturm, art historian and manager of the Kunstverein Kärnten, 2005

Her oil and acrylic paintings showing at ARC may not look extraordinary at first glance, but the exhibition installation is unpretentious and visually well balanced. However, the lack of frames on most of the paintings is unfortunate. On the smaller, L-shaped wall of the gallery, 5 paintings created in the period from 1944 to 1955 provide the viewer with a glimpse of a mood so precisely described in a 1957 article in the Japanese publication The Mainichi:

Her work, her scenes…are grim. People and landscapes are figures and scenes of despair. Her eyes stare, it would seem, into red and awful dawns, into scenes of blasted trees, and lowering skies, and the convulsions of earth. She depicts polar-like landscapes, fragments almost from the end of the world, where leafless trees poke up their shattered limbs, where the last sun perhaps sinks in red hazy ruin on the snows and sands of the final day. There is an eeriness, a ghastliness to all she paints. 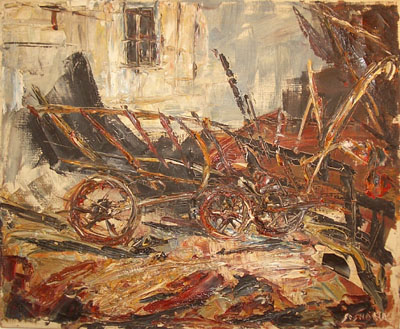 The 1944 oil painting Farm is a disturbing earth-tone composition of broken lines, depicting a shattered carriage in front of a ghostly, floating fragment of a house. A single window — a broken cruciform — frames the darkness of its interior. The once fertile earth has turned into mud and flesh like layers of paint. Not a single trace of life is depicted here. The remaining 6 paintings, in the same group, resonate with a desperate search for light and hope: Flowers in vases are thirsty for water. An unopened airmail letter, from a far away place, is placed next to a knife. A frozen moment in time appears, where fear of bad news is not a paranoid mindset but a bitter pattern of numbed existence.

With the passage of time, the “wracked quality” of her landscapes is transformed. It is an uneasy journey burdened by the weight of memories of post-war Europe. In 1957, while exhibiting in Peking, Soshana explained: “My work has changed completely. Zen. One attempts to say everything in one stroke.” This shifting of focus — a kind of frantic attempt to just capture the moment quickly, to abandon a complex narrative and replace it with simplicity of few bold brush strokes — will echo in many of her later works. Earth VIII from 1997 is a painting that attempts to embody that “zen.” It is a contrasting departure from the depiction of earth in Farm. A sense of freedom and openness dominates Earth VIII, as if dancing brush strokes are rising happily into an open space. The void is welcomed; the fear and the unknown are conquered. The number in the title suggests a series of this kind of work, a healing progression, revisited throughout life. Are these paintings reminders or notes sent to a spirit each time it feared sinking into the darkness of the past? 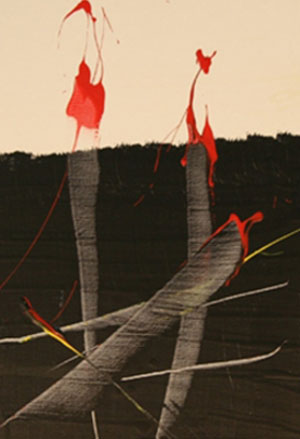 Life, a modest acrylic on canvas painted in 2007, may be the highlight of this exhibition. Also featured on the exhibition postcard, this painting seems to be a perfected “zen” result that’s been lurking through Soshana’s work for decades. The canvas is divided into two parts: black at the bottom and the remaining third is a white space above the “horizon.” Her skilled hand scratches 7 single lines through the black portion of wet canvas, exposing the white background. The scratches vary in thickness and look like dormant roots dipped in blood red, breaking the black earth, sprouting and climbing, bursting into the open to emphasize the white space above. The weight of the bottom portion of the canvas is perfectly balanced with the upward movement of triumphant red stains. One cannot escape the visual metaphor of life’s never-ending movement and power, finding its way through darkness and stillness. 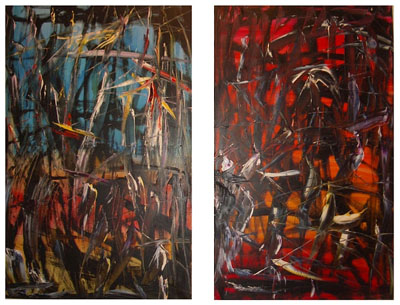 At the far end of the gallery, facing the entrance, two paintings from 1999 Abstractions III and IV are installed just inches apart. These are bold, turbulent canvases with that signature, pointy, upward, almost angry brush strokes. The brighter palate speaks of a journey of coming to grips with serenity and acceptance. The remaining canvases in this exhibition speak of the life-long struggle with Kafkaesque darkness that lurks and haunts. These “artistic passages” create a window to a journey of a defiant spirit that vibrates with strength and resilience.

Soshana was unable to attend the opening reception for this exhibit. Her grand daughter Sarita told me that Soshana is frail, bound to a wheel chair after a hip fracture. Yet, Soshana is here in her work. Her strong presence assures, encourages and nods, as if saying: Everything is fine. Relax and enjoy. Do not resist life. After all, it is just a passage.

The Austrian Post AG is issuing a special stamp titled “Soshana” on 7th March 2008 in Vienna. The stamp will appear as part of the series “Modern Art in Austria.” Submitted by Amos Schueller, Gustav Tschermak Gasse 3/1, A-1180 Vienna, Austria. 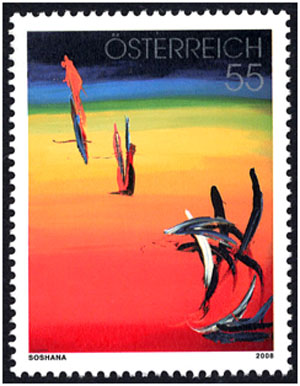