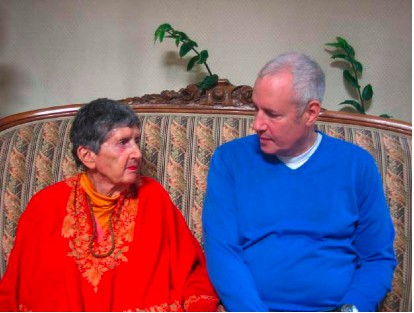 Soshana and her son Amos Schueller

Wanderlust is known to have inspired writers, poets and adventurers of every generation, but among the artists of the last century no painter's creative evolution is as closely linked with her exploratory spirit as that of Soshana. This year, as she celebrates her 80th birthday, Soshana can look back on her life as an artist as an embodiment of the past century, bridging continents and eras alike.

Soshana is a celebrated Austrian painter and renowned contemporary of Pablo Picasso, Albert Giacometti, Mark Rothko and Rufino Tomayo. Her paintings have been collected by private museums and institutions worldwide, including Museums of
Modern Art in Paris, Rome, Rio de Jainero, Sao Paolo, Mexico and New Delhi, as well as numerous museums across the US and Europe. Her works can also be found in the private collections of Baron Rothschild, Jean Paul Sartre, the Guggenheims and the Hirshorns, to name a few.

Born in Vienna, Austria, Soshana will be the first to say that her nationality will not tell you much about her art, even as the history of her nation is mirrored in the alternating vibrancy and darkness of her paintings. After witnessing Hitler marching the German troops past the window of her childhood home when she was just eleven years old, Soshana and her family fled Vienna and stayed on the move as the Germans continued their occupation across the continent. They escaped Vienna via Switzerland to Paris and finally to England, where they boarded the SS Madura, the last commercial boat for the United States. When asked what has been her biggest influence in art and life. "Hitler and the annexation of Vienna," she readily says. "Had all that not happened I would never have become the person I did. I would have grown up and perhaps stayed in Vienna, and lived a completely different life, maybe not even as an artist."

Ulli Sturm, an art historian and manager of the Kunstverein Kaernten, has described Soshana as possessing the enigmatic character of someone with "a large dose of assertiveness, the pronounced ability to communicate with others, as well as an insatiable curiosity to create, accomplish and experience. What is more ... a quick wittedness and flexibility relative to ones surroundings and last but not least, a downright ‘masculine' selfconfidence." Her charisma has aided her in making acquaintance with the likes of Constantine Branscusi and Jean-Paul Sartre, and did not escape the attention of Pablo Picasso or Alberto Giacometti, who repeatedly painted her portrait.

Soshana first started to paint at the age of sixteen. Her first trip was to France where she first met Picasso, who advised her, at the same time that he was painting her portrait: "Listen to no one. Look at many things. Work all by yourself". At 17, shortly after arriving in the United States, she traveled cross-country with artist, art teacher and future husband Beys Afroyim. In the course of her travels across the states, her education took an informal turn, as she visited and painted the portraits of many prominent personalities. Those depicted hailed predominantly from Europe and included Bruno Walter, Otto Klemperer, Thomas Mann, Hanns Eisler, Leon Feuchtwanger, Arnold Schoenberg, and quite notably Franz Werfel on his deathbed.

Soshana is as much a ‘collector of worlds' in her art practice as she is in her travels. Christian Kircher, Commercial Director of the Wien Museum has observed, "The world itself is the stage upon which her life has been played out." She has lived in Holland, Austria, England, Poland, the Czech Republic, Israel, France, and the US. Soshana has spoken of her continuous journey succinctly and poignantly, "the people are different in different countries and in every country one must adapt."

Accordingly, none of this narrative is omitted in her paintings. Her works are sensitive and electrifying, cerebral and dynamic. The oeuvre as a whole can be seen as intensely nonlinear, even as she always experiments with line and color, expressionism and minimalism. While she began her career in classically studied figuration, she has visibly participated in some of the most climactic art movements of the past century.

Soshana has had to personally combat some of the past century's most conceptually riveting social battles, including undergoing a feminist revolution in her own right. She reflected on her hardest time being in Paris in the 50's. At that time it was "very difficult and hard to exist as a woman artist. Many galleries did not want woman artists, no matter how good they were... At that time the Director of the Gallery de France in Paris, a woman herself, said to me: "we do not want woman artists because they get married and have children, and we have to invest 20 years of money to build up an artist." Many galleries thought and acted similarly." This antagonism infuriated and propelled her, to a hallmark exhibition in 1957.

That year, Soshana received an invitation by the Chinese Cultural Ministry to participate in an exhibition at the Imperial Palace in Peking, China. Inspired by Zen and Chinese brush painting where one attempts to express everything with one stroke, Soshana declared, "My work has changed completely" This change resulted in a spirited shift of identities with regard to both her personal contacts and her artistic work. In her work of this period, the paintings borrowed from classic Chinese calligraphy and she maintained a palette of appropriately dark and subtle tones.

However, as her journey took her to Japan, India, Cuba and Mexico, her ‘collection of worlds' expanded and the strokes of her brush revealed a new willingness to experiment. Her later works range from being tragically sonorous to resoundingly joyous. Magnificent bursts of color peek out from behind palpitating lines in her deeply emotive, Abstractionist works. In essence, her hues communicate her emotional centeredness as her lines stress the restlessness of a woman forever yearning to tell her story. Soshana lets her canvases tell their own story. "I express everything through my paintings. When you look at them you can see what I want to say."

Soshana's intimacy with the heights of world culture and the depths of history's darkest moments, coupled with her uncompromising commitment to the truth, present works to us that are records of an individual artist's vision as it perceives history both personal and worldwide. Her paintings relate universal truths through the depiction of intimate subjects, and a sustained commitment to inner reflection through even the darkest moments of life. A lifelong traveler with a lifetime of tales that read like a historical narrative, Soshana's paintings offer a true experience of coming home.