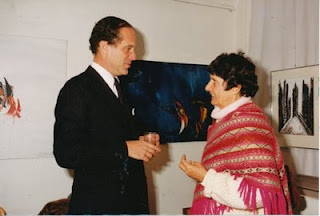 Austrian Consul General to Los Angeles, Martin Weiss will be hosting an art exhibit at the Hillel at UCLA, titled "Shoshana: One Artist's Journey through the 20th century."

Soshana was born in 1927 in Vienna, Austria. In 1938, when Austria was annexed by Nazi-Germany, Soshana and her family fled to England. It was here that Soshana first discovered her love of art and later on in New York she started taking art lessons. She later traveled through the United States where she met and painted authors, musicians, statesmen and scientists including Thomas Mann, Arnold Schoenberg, Leon Feuchtwanger, Otto Klemperer, Theodore Dreiser and Hanns Eisler.

Her first exhibition was held in 1948 in Cuba. A year later she left America for Europe and eventually settled in Israel. In 1951 she moved back to Vienna where she studied at the University of Applied Arts and the Academy of Fine Arts in Vienna.

In March 2008, the Austrian government issued a special stamp in honor of Soshana which will appear as part of the series "Modern Art in Austria."