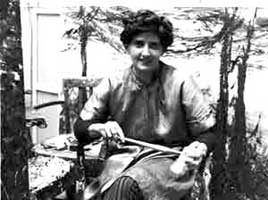 When Soshana had her first major exhibition in 1948 in Havanna, people in her home town Vienna still needed to deal with the damages caused by the war and a dark cloud of post-war depression was floating over Europe.

When Soshana decided shortly after to leave America and to settle after extensive travels throughout Europe in the "Mecca of Art", Paris, the art scene had just restored its liberty in Austria and started to take new paths.
Only a tiny number of Austrian artists (and certainly barely any of them were women) had the chance to venture the leap to Paris or New York; the given conditions of life and work were too vague and an economic survival seemed to be almost impossible.

Much courage and a decent portion of luck was necessary to stand one's ground in the Paris of the 1950ies and to get access to the art scene, especially for an artist with Austrian origin, being a woman and mother.

Among Soshana's merits was her ability to position herself in an art scene, which was dominated by men in a time in the advent of avant-garde, to meet the most outstanding personalities of the art and culture scene (Picasso, Giacometti) of their time and to further develop by her many personal friendships to colleagues. One is not born as an artist and cosmopolitan, instead it is more some sort of an inner attitude, which enables a person to take – if necessary without making any concessions – his/her own way and to consequently learn as much as possible about oneself and the world.

Certainly, talent, high assertiveness, a distinctive capability for communication, insatiable curiosity and the desire to create and to experience are prerequisites for this. Presumptively, a quick apprehension and flexibility towards the environment and last but not least an almost "virile" form of self-confidence – considering the time – were also required. Certainly, all of these qualities allow for an existential and artistic survival, provide the possibility to live independently from persons and places and these qualities are for sure very remarkable, considering her generation and profession. Soshana's divorce from her colleague Beys Afroyim and the fact that she had to put up her son with her family in Vienna prove that these qualities are hardly or not at all compatible with the classic role of a woman and mother.
The delight she derives from travelling and seeing the world prompts her to travel the Far East, Africa and Asia and creates new, central influences in her works. In Beijing she is invited to an exhibition in the Emperor's Palace, in Africa she portrays Albert Schweizer, in India, South-America and Israel her paintings are presented to a large audience. She seems to have the special gift to get to know even in foreign countries the right (and important) persons in the art and culture scene. Her contacts to gallery owners have enabled her to find a steadily increasing number of collectors and aficionados of her paintings.

One invitation leads to another, one journey follows the other. Then, after several exhibitions in Paris, London and Zurich, Soshana moves to Jerusalem for a short time and in 1974 she moves again to New York, where she lived for the following ten years.

From her journeys she has taken along numerous works of different origins, which were created when being immersed in different cultures, as well as a world-wide network of contacts and personal relations.

Unaffected by the so called "crisis of painting" in Europe and the fact that paintings were declared to be "dead" more than once, that painting was actually considered to be obsolete, Soshana realises nine individual exhibitions in the "New Mecca of Art", New York, and meets artists like Marc Rothko or Francesco Clemente. She continues her work being independent from zeitgeist and avant-garde – lures, she resisted at any time and everywhere - showing a vital and incessant continuity in her paintings and drawings .

Her return to her native city Vienna in 1985 can be considered as an attempt to finally settle in one place and to live in the bosom of her family. Her artistic activities and restlessness, combined with her continuos curiosity to catch something new, something different in her paintings, leads to many paintings from her journeys – her appetite for travelling is still not satisfied – and to series of drawings, which resume her œuvre. Reminiscences on earlier series of works and a process of compression can be clearly noted in her late work.

The painter and cosmopolitan (with Austrian roots) Soshana has travelled around the world and back, not in 80 days, but after all in almost 80 years.
She has spent more than half of her life at the crucial intersections of the modern art scene and in far away countries. The Jewish painter, who had been displaced from Vienna, has dedicated her life obsessively to painting, in the 1950ies she was acquainted with Giacometti, Picasso, Brancusi and Sartre and later on she had intensive contacts to the COBRA-group. She has portrayed famous politicians and artists and she has constantly broadened her artistic horizon by her extensive study trips. Her work has been shown to a broad audience, from Tokyo to Paris, from New York to Sao Paolo. Her paintings are now in important public and private collections.

Travelling and painting are still the determining factors in her life.
The reward is her œuvre, of which the majority could be preserved, containing innumerable canvases and works on paper.

The price is perhaps a unique and exciting, but also lonesome life story of a self-confident and dominant woman who has done the same things as her male colleagues by taking her artistic path in a consequent and thoroughgoing, unloaded and unobstructed way.